With Jebel Nugum towering over it, Sana’a sits on the narrowest point of a major mountain plateau, (2.286 metres) above sea level. The region’s volcanic origin and regular rainfall make it fertile and it enjoys a temperate climate throughout the year with the occasional sharp frost in the small hours of winter nights. One legend tells of its founding by Shem the son of Noah. Sana’a has been of great importance since ancient times, an urban centre for the tribes and its market always a trading nucleus for the region. It lies at the intersection to two major ancient trade routes, one of them linking the fertile upland plains, the other Marib and the Red Sea, and was a natural commercial centre. The name Sana’a probably derives from a South Arabian term meaning well fortified. Its Qasr as-Silha, rebuilt on the establishment of Islam, can be seen today with many of its walls still standing. In the Old City of Sana’a around 14.000 tower houses rise up six (sometimes even nine) storeys high. Many originally had an agricultural vocation limited to adjacent land. The traditional social structures of Yemen partly define the way a house is built. The technique of building combines skill handed down by one generation to another – to produce a creativeness in the use of space and light. While in many other Arab nations houses surround a secluded courtyard and look inwards, Yemeni houses look out on to communal streets. So what of this ancient city of Sana’a? Visitors, Arab and European, have always been impressed by its fortifications, architecture, and gardens, and by its populousness- around twelve thousand in the early seventeenth century, up to forty thousand in the mid nineteenth century and around one million today. “Abounding in good things”, wrote the twelfth century Arab geographer al-Idrisi, “and full of buildings… the oldest, the largest and most populous city of Yemen” – of Arabia, he could have added – “an even atmosphere, a fertile soil, and the heat and the cold there are always temperate”. Sana’a is basically a medieval creation, and many of the houses pre-date the nineteenth century, especially in their lower storeys. The organization of the city is typical of the region: massive perimeter walls, a large and thriving market, a Great Mosque for the larger congregation on Fridays, and a ruler’s palace, now long gone but likely in the earlier period to have been near the Great Mosque. Such a palace typically included administrative offices, reception salons, baths and well-watered gardens with more fountains. To walk in the old city is an intense pleasure at any hour o the day. 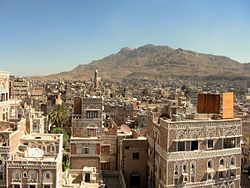