The old walled city of Shibam is named after king Shibam Bin Harith Ibn Saba who ruled from here. It was a major city on the overland spice and incense route.  Although its origins are still not completely understood, it was trading at the time of the Sabaeans around the fourth and fifth centuries BC. The present settlement seems to have been established around the third century AD, after the destruction of Shabwa   It has been the commercial and political capital of Hadramout, many times. More recently, it was the commercial capital Wadi Hadramout until 1940, when an airport was built east of Seiyun, and the economic centre of gravity moved there.  Shibam is made up of domestic, commercial, educational, administrative and religious buildings – a small walled city that is a complete unit in itself. It has seven mosques, including the Rashid Mosque (sometimes called the Masjid al-Jum’a, the Fiday mosque), which date back to the early tenth century. Its unique architectural heritage of 500 mud-brick houses is an extraordinary example of traditional Yemeni building skills. Some of these houses are many centuries old and rise up to seven or eight storeys, the tallest reaching 30m.   The city’s towering appearance prompted Freya Stark to describe it as “the Manhattan of the desert”. It results partly from the fact that it is built on a mound made up of the remains of earlier towns.  The impression is enhanced by the abundance of windows, usually open, with wooden shutters, or harem grilles, and ventilation openings – often two at different levels on each floor; and by the long lines of shadows cast by the corners and edges of buildings in the afternoon sun. the city was added to UNESCO’s World Heritage list in 1982.  Those who can afford it limewash their houses to protect them against termites and against the rains and flooding which occur from time to time in sa’il, the bed of the main wadi.  In general the windowless lower floors are used for grain storage, with areas for domestic use above and those for family and leisure above that. The main room on the second floor is used by men for socializing. It often has wonderful carved plasterwork and freestanding decorated wooden columns supporting the ceiling, while women’s areas are found higher, usually on the third or fourth floor. The highest rooms are for communal use by the whole family, and on the upper levels there are often bridges (mi’bar) and doors connecting the houses. These are a defensive feature, but also a practical one – especially for old people who find it difficult to walk up and down the interminable staircases.

Seiyun is the largest town of the Wadi Hdramout and the provincial capital and main government, commercial and communications centre. It is known for the fabulous palm groves that surround it and for its old market where traditional crafts such as jewellery are still practiced. The town, which has a history going back thousands of years, probably owes its origin to this market, once and important stopping place on the early trade route that ran east through Wadi Masila and on to Shihr on the coast. Over many years the gathering of people here led to an urban centre being developed with houses, mosques and schools.  In 1494 there was an influx of people of the Hamdani tribes from north of Sana’a. Their leader was Amir Badr Ibn Tawariq Kathiri, the ancestor of the Kathiri Sultans who ruled from their capital here from 1516 until independence from the British in 1967.  The massive Sultan’s Palace, with its four corner towers, stands in the oldest part of Seiyun, nest to the busy market; it is the largest mud-brick building in the Wadi Hadramout and an outstanding example of mud architecture. It was built in 1873, rebuilt in 1926 by Mansur bin Ghalib al Kathiri and whitewashed by his son Ali in 1935. Today it houses a museum of archaeology with finds from Raybun, one of Yemen’s most important ancient sites as well as exhibits on popular traditions, folklore and costumes. It also includes objects from the colonial days.

Encircled by palm groves, is Tarim, which takes its name from a local king, Tarim Ibn Hadramout Ibn Saba Al-Assgar. It was a major centre for the Kathiri state until the 1960s; it was the capital of Hadhramout in ancient times and has been the religious capital of the Wadi Hadramout since the tenth century. Its history, like Shibam’s, is related to the rise of the Himyar Kingdom and the destruction of Shabwa. Tarim’s reputation as a centre of religious teaching extended well beyond the Arabian Peninsula, reaching east Africa and Southeast Asia. Locals will tell you that there was once a mosque for each day of the Islamic year. (This was mainly due to the building of mosques by returned merchants as an offering of thanks for the wealth and business prosperity they had won in south – east Asia).   One of the most impressive, with its south-east Asian influences and 50-ft-high minaret, is the Al Muhdhar mosque. Built in 1915, it is one of the great symbols of Yemeni architecture. Tarim is also known for its libraries, the most famous being the Al Kaf Manuscripts Library, which houses around 5000 manuscripts from the surrounding region covering religion, the thoughts of the prophets, Islamic law, Sufism, medicine, astronomy, agriculture, biography, history, and mathematics. Many go back hundreds of years, and often contain vibrantly colored illuminations and illustrations.  The architecture of  Tarim is more varied than that of any other Hadramout town. The town’s building boom began in the nineteenth century and reached its height between the late 1920s and the early 1940s. 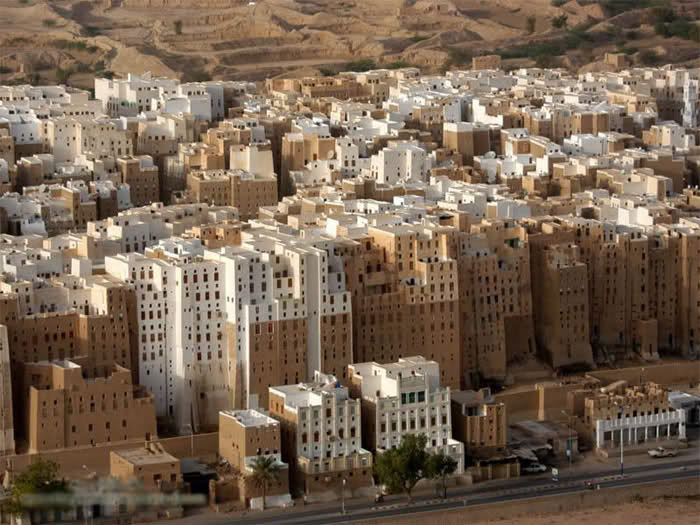