Socotra is the largest in a small archipelago of four islands which include The Brothers (Samhah and Darsa) and Abd al Kuri. It lies in the Indian Ocean on a mid-oceanic volcanic ridge 500km roughly 130km long and 35km wide. Its name may be derived from the Arabic suqs qutra, means (the market of dragon’s blood”- a reference to the resin of its most famous tree species, or from a Sanscrit term for the “abode of the blest”. Positioned near the southern gateway to the Red Sea, Socotra has been famous since ancient times. By the time of Abraham, traders from Egypt, Africa, India and Arabia called in here. Ancient Egypt knew Socotra as the Island of the Genie- The spirit of the sacred tree, whose gum they used for mummification, temple offerings and medicine. In the first century AD the Greeks called Socotra, Dioscoridea. The Hadramout kingdom traded here out of Qana, near present-day Bir Ali, and later the Himyarites sailed here from Muza on the Red Sea. The island’s population has now reached 100.000. The people speak the unique Socotri language. Due to the island’s isolation and the fact that human activity has been kept to a minimum, about 30 per cent of its flora is unique to the archipelago. Domestic animals – camels, assess, goats, sheep and cats – were brought in by traders, but a natural balance has been reached and is preserved by the management of livestock to prevent overgrazing. In 2008, Socotra Archipelago was enlisted by UNESCO in the World Heritage sites list with the following motivation: “The site is of universal importance because of its biodiversity with rich and distinct flora and fauna: 37% of Socotra’s 825 plant species, 90% of its reptile species and 95% of its land snail species do not occur anywhere else in the world. The site also supports globally significant populations of land and sea birds (192 bird species, 44 of which breed on the islands while 85 are regular migrants), including a number of threatened species. The marine life of Socotra is also very diverse, with 253 species of reef-building corals, 730 species of coastal fish and 300 species of crab, lobster and shrimp.” (source: UNESCO official website) 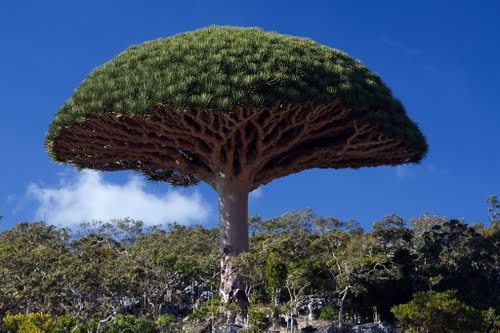